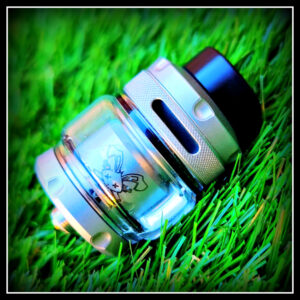 Fresh off from my review of the Hellvape Hellbeast 2 Sub-Ohm Tank, Hellvape comes at us again with yet another new atomiser on the market. That’s right! Today, we will be looking at another addition to their Dead Rabbit series of tanks: the Dead Rabbit M RTA!

This device was kindly sent to me for review by Hellvape themselves (thank you, Jessica!).

Hellvape needs no introduction in the world of rebuildable atomisers. Indeed, they have produced the very popular and successful Dead Rabbit and Fat Rabbit series of attys for the past few years. In fact, the Fat Rabbit RTA is a personal favourite of mine. And so, I was particularly interested in trying out the device for review today, as it appears to be their first mesh RTA under the Dead Rabbit series.

Mesh rebuildable atomisers are not exactly new to our industry; and arguably, it’s one of those where vapers either love or hate using them, for various reasons. I am of the “love mesh” camp – well most of the time anyway depending on the mechanics of the atomiser I am using. Suffice to say, I’ve had my share of great and not-so-great mesh atomisers, hence another reason for my interest in reviewing the Hellvape Dead Rabbit M RTA.

And yes, the “M” must stand for mesh!

As always, my review will be from my own personal experience as an average vaper, as most of you reading will be.

I was sent what I believe to be the retail version of the Hellvape Dead Rabbit M RTA, containing:

The box is in Hellvape’s signature orange, with the Dead Rabbit series and also Vapers Brazil logos on top. An illustration of the RTA, features, parameters and box contents are all listed around this orange box. The RTA and its spare bubble glass sit on a thick and very orange foam tray with all other kit accessories underneath said tray. A minimalistic yet effective packaging method – well done here, Hellvape!

Salient Features of the tank include:

If you are familiar with the Dead Rabbit RTAs, then you will be right at home with how the Dead Rabbit M RTA looks. It has that Dead Rabbit form factor, and yet looks unique enough to make it stand out on its own. Branding is as what’s expected of Hellvape, with it mostly being the Dead Rabbit logo and Vapers Brazil logo on either side of the inner chamber.

Side-stepping for a minute: I have to admit that I do not know much about Vapers Brazil (and that’s probably on me). In fact, I couldn’t really find much social media presence of them other than their website which includes a webshop and blog articles. As to what and how much they contributed to the design and functionality of the Dead Rabbit M RTA, I couldn’t really tell you at the moment… 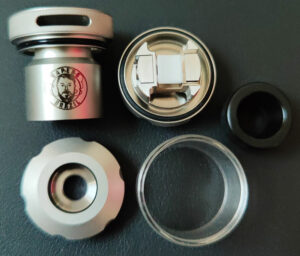 Going back to the RTA, though, it looks solid and has been finished with high quality. Everything fits as it should and there is no crunching of threads or sharp edges anywhere. It also dissembles easily into its main component parts, making for easy cleaning and maintenance.

Starting at the top, the filling is absolutely easy with this RTA with a quarter turn of knurled the top cap to expose a couple of generously-sized kidney-shaped fill holes. The drip tip is very comfortable to use with just the right feel and height. Airflow control is achieved via turning the airflow ring, which has full stops, to expose or cover a couple of cyclops holes for airflow. These holes feed air internally via the honeycomb-style airflow holes inside the chamber, which make for a smooth draw.

All in all, the Hellvape Dead Rabbit M RTA is a very nice-looking and easy-to-use mesh atomiser!

When it comes to mesh atomisers, “building” usually means shaping the mesh coil/strip and installing it onto the deck, and the system used here is not that much different. The build deck is nicely laid out and spaced, with good-sized wicking wells.

The “selling point” of this RTA to me is how ridiculously easy it is to build: 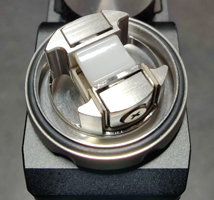 2. Shape the coil using the combined tool (bend the strip using the middle section of the tool’s handle) and place it inside each clamp. This is where care must be taken to ensure that the mesh strip is level and does not become bent in any way. The best way I’ve found to do this is “softly” holding the mesh into place whilst tightening the post screws. 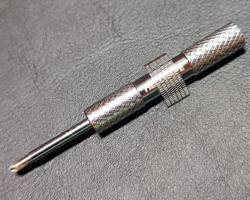 3. Tighten and pulse the mesh strip (I did mine at 15 W) until the whole strip is glowing evenly from the centre and out. 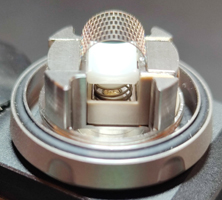 4. Slide the cotton underneath the mesh, again taking care that the mesh strip remains in its shape.

5. Cut the cotton right to the edge of the build deck, and then comb it out a little just to straighten the strands.

6. Then cut the cotton at a 45-degree angle (see photo), as this ensures that all the strip is in contact with cotton whilst not overcrowding the wicking wells. Remember that mesh will always require more cotton than normal to help avoid dry hits.

7. Tuck the ends into each well in such a way that they remain in place but do not touch the base floor.

8. Prime (saturate) the cotton fully with e-liquid whilst pulsing in very short bursts to help the cotton in absorbing the e-liquid. Mesh builds must always be SUPER saturated, and again that is to avoid dry hits.

9. Screw the RTA base into the rest of the tank and then fill with e-liquid.

Et voila! Your RTA is ready to be vaped and enjoyed! 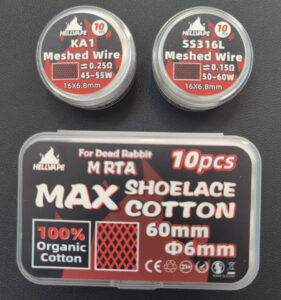 It really is a major pro that Hellvape included the 2 types of mesh strips they offer in the package, at 2 pieces each. With the number of strips and cotton the package comes with, you’ll have everything you need to get started and to keep going for several weeks. I always like it when companies do that as it shows much consideration for the vaper/end user.

Of the two types of mesh strips, I much prefer the SS316L one as I could get a flavour that was crisp and clear. The KA1 strip also offers good flavour, although perhaps with not as much definition as the one I get from the SS316L strip. Still, these are very good mesh strips that perform very well.

One thing I did observe, as I tried experimenting with the wicking a little bit, is that the Hellvape max shoelace cotton seems to be slightly less dense than the other 6 mm cotton laces I use for mesh wicking. When wicked with this thicker cotton, I could tell that the flavour went up a notch, probably because there is more e-liquid available to the mesh. Being a flavour-chaser, I think I will continue to use this thicker cotton for this RTA. Now, this isn’t a con by any means but is rather a personal preference.

As for wattages, I found myself vaping these at the limit of their range for the maximum warmth I can get without burning the wicks. I wouldn’t really advise going over these recommended ranges as when I did so, I got some burnt taste after a couple of puffs.

The Hellvape Dead Rabbit M RTA does what it says on the tin, and does it well. It really is quite straightforward to build, making it user-friendly to vapers of all abilities. The flavour it provides is more than decent. For these main reasons, this RTA gets a solid Yay from me, and is something I will highly recommend!

The wicking, which is by far the trickiest part of mesh-building in general, is quite forgiving when done correctly. I didn’t have any dry hit whatsoever in the way that I build the RTA (following the steps I described above). And because of this, I would rate the Hellvape Dead Rabbit M RTA to be a tad better than its main competitors, especially those where wicking can be hit or miss.

And that’s the end of my review! I hope you all enjoyed it.

My sincerest appreciation again to Hellvape for sending me this RTA for the review! To pick up the Dead Rabbit M, check out the links to Hellvape at the start of the review.