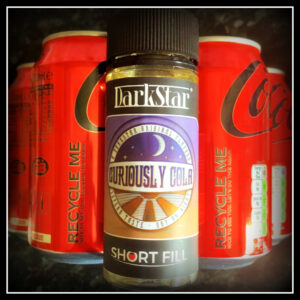 An E-liquid review today from a well known UK brand; Curiously Cola by Darkstar. Based in North Yorks, UK, Darkstar has a massive selection of their own mixed E-liquids in Shortfill, One-Shots and Bottle Shots® on their website. You will also find flavour concentrates, PG, VG and Nicotine if DIY mixing is your thing. I’ve found shipping to be really fast from them and it’s free delivery on orders over £40.

So let’s check out this Curiously Cola flavour.

Curiously Cola comes in a 120ml Shortfill bottle with 100ml of Eliquid inside. You can also purchase this Darkstar flavour in a One-Shot bottle, Bottle Shot® or Bottle Shot® Bundle.

A label wraps the shortfill bottle with the printed flavour title in a circular graphic on the front. Going round the circular graphic is printed “A Darkstar original flavour” and “Super Taste – Day or Night”. The right of the label includes the printed flavour description and printed instructions on how to add shots to the bottle. Printed on the left of the label are Darkstar’s contact info and an E-liquid allergy warning.

On the bottom of the bottle is a label with the printed batch number and E-liquid best before date.

So no guesses of the flavour we are expecting from an E-liquid called ‘Curiously Cola’ but it is defined on the Darkstar website as; We had to satisfy our curiosity when it came to creating the perfect cola flavours. Captivatingly complex, Curiously Cola will take you back to that sweet and smooth taste of yesteryear. On having a smell from the bottle, it is sweet and rich in Cola scent.

Like other Darkstar shortfill bottles, the base ratio of this E-liquid is 70VG/30PG before adding any shots. Adding 2 x 18mg Nic shots straight to the bottle will give a 3mg strength as usual. Being a Cola flavour, it should be good for a shake and vape but would suggest a little steep with this one.

On the vape, Curiously Cola is a sweet flavour that packs a big Cola punch from the offset. It is an all-out refreshing Cola flavour, though there are slight hints of a Citrus coming through for me that livens it all up a bit. Imagine having a big glass of Cola with some Lemon cut on top, then once it’s pretty much gone, you are left with the less fizzy gulps at the bottom – For me, this tastes just like that!

There isn’t any cooling at all that I can pick up on, so most definitely a shot of the cool stuff would go well if that’s your thing. To be honest, it’s really good it is not already added, so that way non-icy heads like myself can have a choice.

Curiously Cola is a smooth vape and although there is sweetness, it isn’t overdone to stop it from being a decent all-day vape. Some Cola E-liquids can leave a thick sort of mouthfeel, but this one is perfect. It’s full of flavour but at the same time, light and refreshing! This was a flavour I was keen to try after reviewing DSV’s Cherry Cola last year, and it hasn’t let me down.

My Score: 8.2/10 – A refreshing Cola flavour perfect for Summer!

To pick up Curiously Cola by Darkstar, head over to their website via the links at the start of the review. A 120ml Shortfill bottle is currently just £9.95 which is a steal! You can also add Nic or Cooling shots for a bit more money on the order.