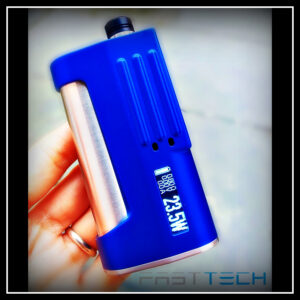 How’s it going, folks? Jen here for another hardware review, and this time from a kit kindly supplied by the generous folks at Fasttech.com!

To anyone who doesn’t know them by now, Fasttech stocks a massive amount of vaping gear and supplies that are priced very well, including the latest and greatest vape kits like the one we are going to be looking at today! Do check them out for your vaping needs as most items ship for free or at low cost, making them a fantastic choice for us vapers!

So, today we shall be looking at one of (in my humble opinion) the prettiest vape kits in the market at the moment: the Ambition Mods and Sun Box 2.0 60W AIO Kit! This kit is made by Ambition Mods and designed by Sun Box.

Now, both companies aren’t exactly household names like the Aspire’s and Smok’s of the world, but they are fast gaining attention (and adoration!) from vapers of all abilities. Ambition Mods are probably best known for their Bishop MTL RTA, widely regarded as one of the best in class; and SunBox’s claim to fame is probably their collaboration with Aspire in creating the very popular Mixx Mod.

Ambition Mods and Sun Box cater more to the hobbyist vaper, both focusing on more specialised and high-end gear. And this collaboration for the 2.0 60W AIO is almost a match made in heaven for fans of these brands!

BB in the title of this review means Billet Box, and in the last several months, we have seen an uptick of devices that would seem to want to attract vapers who use or prefer billet boxes with the release of devices such as the Dovpo Abyss, Aspire Sunboxx (yet another collaboration between Aspire and Sun Box), and the 2.0 60W kit that we are reviewing today. Billet Box is a company in and of itself, and it’s the concept of their products that is sort of being emulated by these releases I have mentioned. I suppose the idea is to replicate or approximate the BB experience without necessarily dropping hundreds of pounds on an original BB.

Personally, I have not tried a BB myself but I have heard great things about it, which makes me extra curious about the kit we are going to be looking at today. As always, I shall be looking at this device as an average vaper, as most of you guys reading this review will be!

I was sent the retail version of the Ambition Mods and Sun Box 2.0 60W AIO kit containing: 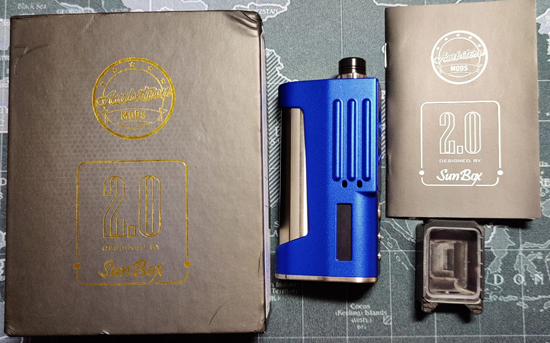 Salient Features of this kit are: 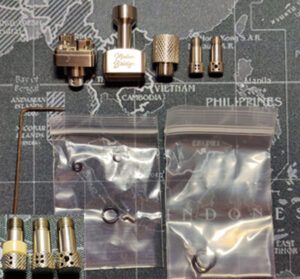 The kit comes in a rather simple black box with gold and white print. The company logos of Ambition Mods and Sun Box adorn the top, with manufacturer information, socials, and kit contents around the side and back of the box. Everything inside the box sits on a foam tray, which makes for a clear and straightforward presentation. Even if the packaging may seem plain, I do like this style of no-nonsense packaging with all the spares and parts clearly laid out!

Everything that you’d need to start using the kit comes inside the box apart from a 18650 cell and a coil + wick, which is again another pro! 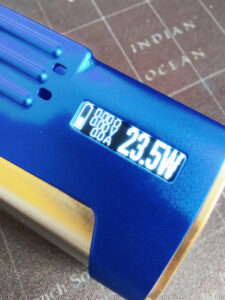 You guys should have seen the smile on my face when I first laid my eyes on this mod! It looks so classy and well-finished; I have absolutely no complaints from an aesthetics point of view. There are no rough edges, scratches, and everything is flush to where it should be. But enough gushing, let’s talk specs!

The mod does have some weight to it, especially with the battery tube and base being made from stainless steel. I really like this design because it makes for a stable mod with the right amount of weight, even with a battery and tank installed. It comes in 3 colours, and I have received the (magnificent) Glamour Blue version.

The mod barely has any branding, being found only on the base and done very tastefully. It feels great in the hand and especially for one-hand operation; all the curves are made just right for a very comfortable vaping experience. To be honest, it looks and feels premium and high-end. Ambition Mods and Sun Box have truly done their job there! 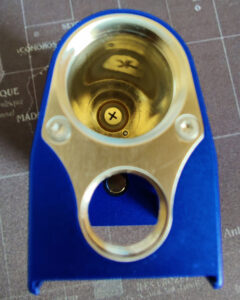 At the top, you will find the drip tip that threads into the mod, and the vented battery top cap. Said top cap has very smooth threads for operation, there is nothing that crunches which tells me that it is made to take a beating! Battery polarities are clearly marked inside the battery tube. A pair of airflow holes can be found on each side, and one of these sides has the recessed OLED screen. This screen has a simple yet functional display, showing power/temperature, ohm load, voltage, and amps. The front of the mod has the fire and adjustment buttons. And this is where the boro tank installs via a sliding metal door.

Operating the mod is easy enough:

Now, you may say that this all sounds rather simplistic (where’s the puff counter, for example), but for the audience, this is aimed at, the information and modes provided are adequate enough, I feel.

The mod fires quickly and does give warning messages when necessary. As for cons, I really struggled to find any on the mod; but more as a “something of note” rather than a negative, the mod does not offer any USB port for charging the battery, so please bear in mind that you will need to charge your cells another way.

B. Molen Bridge and Boro Tank

As happy as I was with the mod, I was even more impressed by the Molen Bridge and Boro Tank!

Starting with the tank, it is refilled by sliding a glass door, which makes for a very convenient filling experience. Yes, you can fill whilst the tank sits on the mod, but personally, I preferred taking the tank out when refilling, and I will tell you why in a bit. With a 4mL capacity though, I didn’t have to refill it often when used in MTL. 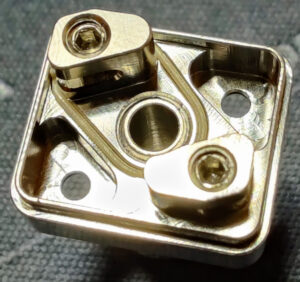 And now, on probably the star of the show in my eyes: the Molen Bridge! The bridge comes in two main parts: the build deck, which slots into the tank base, and the chamber where the drip tip sits. As with the mod, everything was finished nicely and perfectly, from the post screws, wicking wells, and airflow hole where the airflow pins are screwed in from the bottom.

The build deck is for a single-coil, and I would think a simple 3mm ID coil will be fine on there (I used a 2.5mm Fused Clapton most of the time during testing). There are two holes in the base of the wicking wells for the liquid to come in. The posts are offset, so the coil would be best aligned with the posts. The airflow pins are easy to swap around without needing to remove the build. 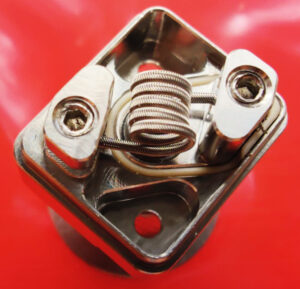 Building it was OK; it was easy enough but of course, a little fiddly given the small parts that need to be handled. Saying that though, the most challenging part for me was securing the leads given the small post screws. But this isn’t a con really; this is a “nature of the beast” kind of thing.

Once the leads were secured, I tightened the post screws and snipped the ends as flush as possible to avoid shorting. I sat my coil a few mm above the airflow hole and made sure that it isn’t too high to be touching the chamber.

I then trimmed the wick alongside the shape of the base and tucked them into the wicking wells. The wick doesn’t need to be loose or tight; just a normal amount of cotton will be enough as this bridge is a little forgiving on the wicking. As a tip though, I would recommend fanning out the cotton a bit before tucking them into the wells and also making sure that all of the wicks are inside the wells (none sticking out). All of these should enhance the wicking.

As for the flavour from this RBA/bridge, it is simply phenomenal! Easily a 9/10 on my flavour rating scale, it brings out all flavour notes even in low-ish wattage (like 15W or so). I enjoyed the flavour from this bridge so much that I found myself using it exclusively for a few days versus my other devices. 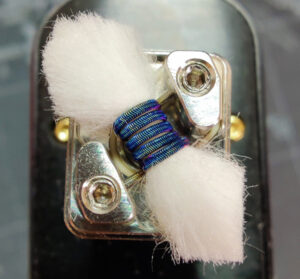 The tank didn’t leak, however, there is noticeable condensation from the airflow pin and the top of the chamber. It is significant enough for me to label it as my second con for this portion of the kit; e-liquid just pools in this space somehow. I am not an engineer by any means, but I think it’s because there is a gap between the end of the drip tip and the top of the chamber that causes this pooling. I found myself having to dry the drip tip and tipping over the tank to get rid of this condensation whenever I won’t be using the tank for a few hours. Because if I don’t, then this condensation goes down into the base and then out of the airflow pin, making it seem like a leak when it isn’t. And so, I would highly advise doing the same should you pick up this kit/bridge.

But despite these cons, the vape quality and flavour coming from it is sooooo good, that drying these mentioned parts out from time to time is worth it for me!

Unquestionably, a Yay from me on the Ambition Mods and Sun Box 2.0 60W AIO Kit! It’s a sexy mod that comes with one of the best rebuildables I have ever used. The flavour is off the hook and overall, it’s just a great looking kit!

Now, who is this kit for? I did mention in the title that it is for the BB curious, but additionally, I highly recommend this kit for vapers looking for a sturdy yet classy AIO that will stand the test of time.

It doesn’t come with stock coils unlike other AIOs in the market, and so this kit will be for vapers who are into rebuilding, or even those wanting to try it as it is simple enough to build.

It has definitely replaced my everyday AIO in my vape kit rotation, and so I do recommend that you pick up this kit even if it is a little pricier than others. It’s worth it!

Once again, my sincerest thanks to Fasttech.com for allowing me the privilege to review the Ambition Mods and Sun Box 2.0 60W AIO Kit! To purchase the kit head over to Fasttech via the links at the start of the review!