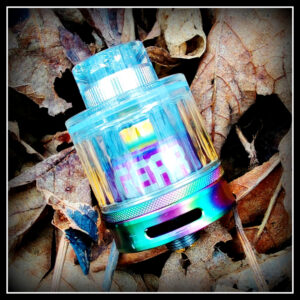 A review for a vape RTA today and this is the Gear V2 by Wotofo. This newer version follows the very popular original Gear, which was then branded by OFRF. That Gear RTA was reviewed on the blog way back and was a brilliant little tank that still sits on my shelf today.

Every experienced vaper will know the Wotofo brand. They have consecutively released great products for many years, originally more known for the RDA and tank side, they have also released some brilliant devices over the last few years.

So let’s jump in and see how the Gear V2 fairs up and if it’s changed much from its original release.

The Gear V2 by Wotofo comes in a small square cardboard box with a clear outer sleeve over the top. On the top of the outer sleeve is the printed title and branding. You can see the tank sitting in padding with the usual Wotofo Green padding through the sleeve.

The bottom of the box has a printed title, Wotofo branding and warnings. On the sides of the box are printed branding, a barcode label, a scratch-for-authenticity sticker and a label with the tank colour printed on it. On one side is the printed box contents which are:

The Gear V2 by Wotofo is a single coil tank that holds 3.5ml (2ml in TPD countries) of E-liquid. The size of the tank is 24mm in diameter with a height of 38.5mm and is made with both PCTG and Stainless Steel. The tank screws apart into 3 sections.

There is a fixed drip tip on top in the screw-in top section with the screw-in deck situated at the bottom. The centre of the tank is the usual clear window which has a striped inner design and smooth outer surface. Inside is a fixed stainless deck top with a short chimney leading up the centre to the drip tip. The bottom deck simply unscrews from the main tank. The top section also unscrews from the tank in order to refill with E-liquid.

The deck on the Gear V2 holds a single coil that is secured by 2 flathead screws. Each side of the deck has a juice well where the wick sits. Under the coil position is a large airflow hole in the centre. Air is taken in via two slots adjacent on the outer of the deck. This is fixed and there isn’t an airflow control ring to adjust. Around the deck at the top is an O-ring to secure when screwing back onto the main tank section.

Inside the box are 2 x 0.33Ω Framed Staple Clapton coils. Simply take one of the coils and add a leg under the screw on each side, tighten the screw then trim the legs. Add a cotton wick (also included), cut and push into the juice wells, and you’re away!

The bottom of the deck includes etched branding with a gold 510 pin in the centre.

When I heard about a Gear V2, I was quite excited to try it. This is mainly because I like the first Gear tank and rated it highly. I reviewed that one on release a few years ago now and although it was a small RTA, it gave amazing clouds and flavour. This newer Gear V2 really hasn’t got even close to the first one for me! 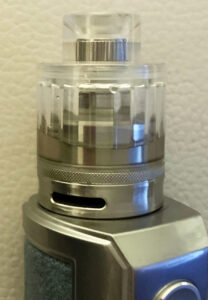 The first Gear could get a little weepy around the airflow here and there but not much to write home about. This V2 is a bit different. You could shave two Old English Sheepdogs, use all the fur for wicking and juice would still find its way out of the airflow slots. I’ve vaped with proper tanks and mods since 2015 so wouldn’t say I’m too novice when coiling and wicking. I’ve wicked the Gear V2 at least 8 times now, with different Cotton and even changed the coil twice, and the E-liquid still runs down the mod when sat for a little while.

The other issue I have is the design. Sure, it’s different, but for me, it’s a step back from the V1. The V1 middle was glass, this one is plastic and then also visually looks like a lampshade from the 1960s!

When also comparing it to the V1, that one has a removable drip tip and an airflow control ring. Really, this V2 looks and feels like a much earlier version compared to the first one, and was left wondering when the last time I used an RTA that didn’t have controllable airflow.

I was also left scratching my head on how Wotofo, who are built with a reputation on very good tanks, RDA’s and devices would release something like this. It does feel like they went backwards with it. Prior to this, every Wotofo product I’ve had has been very good and reliable.

So let’s try and take some Pros. The Gear V2 offers a really good flavour with a wide-open DTL vape, comparable to the V1 if you can keep the E-liquid where it’s meant to be. Everything to get you going, as always with Wotofo, is in the box. It’s a very simple tank and really easy to coil.

I would suggest looking at an RTA like the Troll X above the Gear V2. Or if wanting to take the mesh route and have that same sort of V2 form factor, have a look at the Profile M RTA. Both are currently the same price at the Wotofo store. I’d even go as far to say if you are in the market for the Gear V2, you’d be better to go for the Gear V1 also still available on the Wotofo website for 10 bucks cheaper.

Even so, to pick up the Gear V2, head over to the Wotofo store links within the review. Thanks for reading!