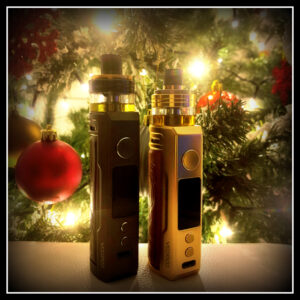 A double hardware review today and this is the Drag X PnP-X and the Drag S PnP-X Kits by Voopoo. If you check out the Voopoo website, you will find all their latest and greatest mods and kits.

We’ve seen a lot of versions of the Drag series over the last few years and these new kits are hot off the press featuring a new ‘Knight’ design on the leather and a brand new PnP tank.

Let’s dive in and check them out!

Both the PnP-X kits come in the same boxes. The outer sleeves of the boxes are Black featuring printed Voopoo branding, device title and an embossed image of the device in front of Angel wings graphic on the top. On the left side of the sleeves are 3 printed key features of each device and QR code for Voopoo. Over on the right side of the sleeves are printed social media info for Voopoo and two labels which are the Bar-code, the colour of the device and Serial numbers.

On the bottom of the outer sleeves is printed box contents, warnings and contact/manufacturer info for Voopoo. There is also a scratch-for-authenticity label stuck on.

Contents in the box are exactly the same for the Drag X PnP-X and Drag S PnP-X, though the S has a different coil resistance on one of them. The contents are: 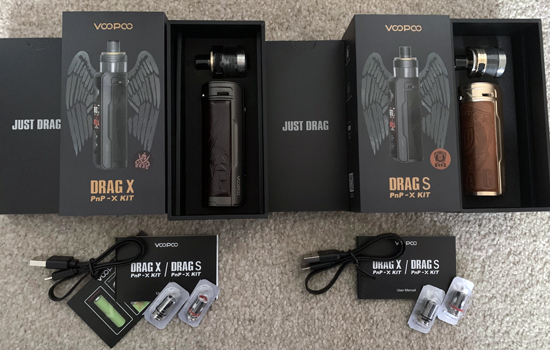 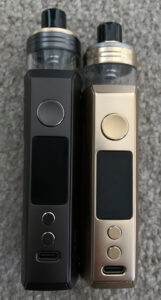 Both Drag X and Drag S are similar to the previous series with mostly a cosmetic change with the new ‘Knight’ theme. The Drag X is a slightly longer device that runs on a 18650 battery powering from 5-80W, while the Drag S has the 2500mAh built-in battery and powers from 5-60W.

Both devices are still in Zinc Alloy and Leather panels around the sides and back. This time though the leather has a Knight theme. Voopoo currently has the devices in 5 new Knight designs which are promoted by Voopoo as the following:

With chivalry as the core, DRAG S/X PnP-X KIT pays tribute to the glory and virtue of the knight. Highlights in design are sufficiently attractive. The product selects five new knight colours, each of which implies a rich design language. 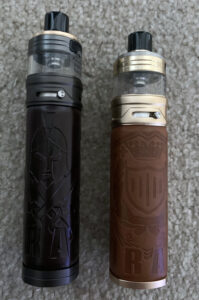 Both the Knight Drag X and S has the new generation GENE.TT chipset by Voopoo with intelligent wattage matching. When in SMART mode, simply drop in the pod and it automatically matches to the best power for the coil. It also stores the last wattage if you’ve changed the power. There is also RBA mode and you can switch between modes easily by 3 fast clicks of the fire button. As the previous Drag Series, it is 5 fast clicks to power on or off.

Both the Drag X PnP-X and Drag S PnP-X have the same displays as the previous Drags. This includes everything such as power, current resistance, mode, puff time and puff counter. There is also the same multiple protections on the GENE.TT chipset including overtime, short-circuit and max power protections. 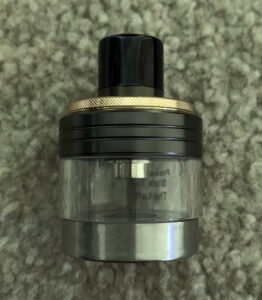 Voopoo comes again with another PnP pod tank in this brand new PnP-X design. These take all the highly popular PnP coil resistance ranges and simply push up from the bottom of the pod to install.

The PnP-X pod is made from tough PCTG and connect magnetically to the device. A thick magnetic base is at the bottom with the main glass sealed above. Around the top of the pod is the juice fill port semi-hidden. To fill the pod, simply push the plastic button and slide the top round to reveal the fill port covered by a rubber bung.

There is an alloy design at the very top under the removable 510 drip tip. The PnP-X come in different colours which applies to the alloy detailing at the top. This depends on the colour Drag X/S kit you purchase as the metal matches that of the Zinc Alloy on the device. You can also purchase the PnP-X pods separately from the kit.

I have been running both the devices and PnP-X pods daily for a week now and am generally impressed with how they run. Both the Drag X and S are still the sturdy and reliable devices that we’ve all come to know, that function really well with clear modes and display. The Drag S battery lasts a good while before needing a charge and a 18650 will do the same in the X.

The new Knight design on the leather panelling is a nice touch to the previous Drag’s and the device colours are great looking with the matching PnP-X pods. I really like the Gold option.

The PnP-X pods is another welcoming design. The pods just look so much better and a notch above the last PnP pods. There seems a much more premium feel to them with the added Zinc Alloy at the top and a removable drip tip. One thing that has stood out to me while in use, is that these pods would also be really good little MTL pods too. I know Voopoo released an MTL PnP pod but these just look and feel so much better. Just throw in a higher ohm PnP coil and change the 510 drip tip if you need to and there you go, a decent MTL pod to use in the Drag devices.

On the vape, the PnP-X pods also just feel better with much more comfort than the last PnP pod. There is still the amazing flavour and cloud production on the PnP coils and the infinite airflow system on the devices helps give the airflow you prefer when using the PnP-X/PnP coils. I did have some leaking issues on the 0.15 coil but that is down to the coil as opposed to the pod tank. Both the 0.2-ohm and 0.3-ohm gave no leaks. The PnP coils do sit secure and snug in the PnP-X pod.

The juice fill port is also a good design feature on the pod. No more pulling out the pod to refill like the default PnP pod, this time it’s all at the top. Just press the little button, slide around the top ring and pull out the bung to fill. Easy!

To purchase either the Drag X PnP-X or the Drag S PnP-X, you can head over to the Voopoo website via the links at the start of the review. They do use Aliexpress to supply and ship but also have a store locator on the website. Other than that, these kits of course will be carried by many vape shops worldwide. Thanks for reading.