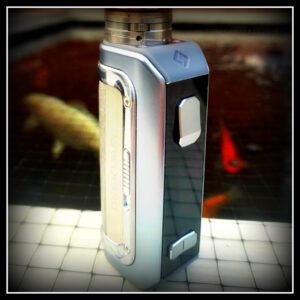 A hardware review for another smaller device today; this is the M100 by Geekvape. This is labelled as the Aegis Mini 2 and improves the design of the Aegis Mini. The M100 was kindly supplied by the folks over at Sourcemore.com. They have a popular web store that offers fast shipping overseas. Their website features all the best vape hardware at good prices and they always have a good selection of clearance items too.

If you are in the market for one of these M100’s by Geekvape and want to pick it up at Sourcemore after the review, add the code M1002M for 30% off at checkout making the current price $34.59. This review is for the M100 device only but does also come in a kit with the ‘Z Nano 2’ tank. You can also pick this up at Sourcemore if you prefer the full kit. 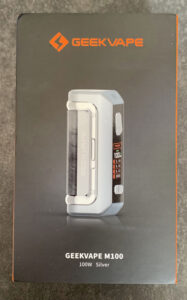 The M100 (Aegis Mini 2) by Geekvape comes in a rectangular Orange & Black cardboard box. The top of the outer sleeve features an embossed graphic of the M100 with the printed title and Geekvape branding. The colour of the device in the box is also printed next to the ‘100W’ showing the max power of the M100. One side of the outer sleeve has printed Geekvape branding and the other side is printed Geekvape’s social media and web address. At the bottom of the outer card sleeve is printed M100 description, 9 key features of the device, package contents, Geekvape’s contact info, bar-code and scratch for authenticity panel. There is also warning graphics printed across the bottom.

The outer sleeve slides off to reveal the inside of the box that has printed Geekvape branding on it. Inside is a sheet of felt padding containing the M100 device. The padding lifts up where a box is underneath that has the type-C charging cable in. Loose in the box is the paperwork, which is a warning card, an envelope with the warranty and the user manual booklet. Obviously, if you buy in kit form, you will get all the tank and accessories for it in the box. 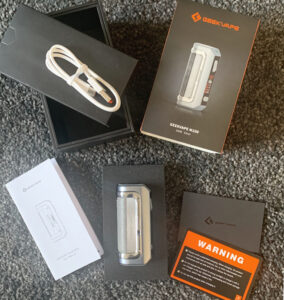 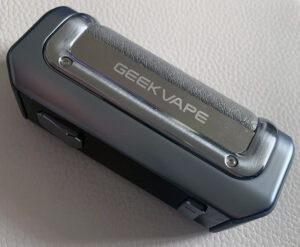 The M100 by Geekvape is an internal battery device with a 2500mAh battery built-in. It fires from 5W-100W and charges via USB Type-C. The device measures 7.8cms height, 4cms width and a depth of 3.9cms.

The body of the M100 is tough and durable like the other Aegis devices, which is dubbed ‘Tri-Proof Tech’ by Geekvape. It is shock-resistant and IP68 rating water and dust resistant. A panel is on the front that has a large main fire/power button at the top above a 1.08″ display screen. Under the display is the up/+ and down/- button. The bottom of the device has a rubber base and at the top has the 510 port and the type-C charge port, which is behind a flip-up rubber cover for protection. Around the back of the M100 is a leather-feel squidgy panel with a stitching design. This is held along the sides of the device with a screwed down frame and alloy plates with Geekvape branding on them.

On one side of the M100 situated within the frame is an A-lock slide switch. This locks the device by switching it to the down position. When locked, this will stop the accidental push of the buttons or firing the device when in a pocket or bag. 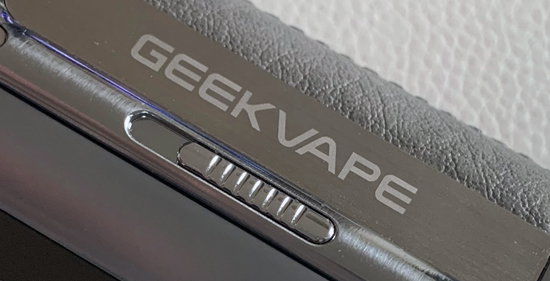 The Geekvape M100 features a colour screen that contains all the necessary information clearly while the device is in use. At the top of the screen is an indicator of what mode is currently running, underneath is a current battery indicator and the current power in large font. Below is 4 sections that include current resistance, puff counter and other details of the M100’s current status.

To power on or off the device, it’s the usual 5 fast clicks of the fire/power button. For increasing or decreasing the current power, it is simply using the up/+ and down/- buttons for 5W increments. To access the menu, it is 3 fast clicks of the fire/power button. From here you can select the mode which is highlighted by pressing the up/+ or down/- button. It is in wattage power mode by default but you can also select; Bypass, VPC, TC-NI, TC-TI, TC-SS and TCR-TCR. In VPC mode, you can adjust output power for each second of vaping power of up to 5 parameters.

Holding both the up/+ and down/- while in the settings menu for 1 second will change the colour of the display screen. There are 5 colour options to choose from.

You can reset the puff counter by simply scrolling down in the menu setting via the fire button and pressing down/- or back to current puffs by up/+. The screen brightness can also be adjusted by having the mod in standby and pressing the fire/power button and up/+ for 1 second to increase, or down/- to decrease. You can also put the device in stealth mode by pressing all the keys together for 2 seconds. This basically just turns off the display while still having use of the fire button.

The M100 has a version display where it displays the current software version. To access this press the up/+ and down/- buttons while the device is powered off. You can also restore it back to factory settings by pressing all the keys for 2 seconds on that screen.

Geekvape has “Stable output buck-boost tech” running on the M100 chip, this apparently optimises power output to create consistent power even when the battery is running low. There are various protections built in such as overcharge and short circuit protection.

I’ve been running the M100 Aegis Mini 2 for the last few weeks as part of my daily setups. I have found the device really nice to use. It looks and feels stylish with also having added rugged protection against accidental drops. It’s comfortable in the hand and easy to both thumb and finger fire with a large angled fire button. The A-lock function is so handy to easily lock the device without button pushes.

The device is easy to read and navigate to the required settings when using the menu. I have been using it in power mode but there is the option to use Temp. control in various builds. I have found there is enough power when firing during a lower battery, unlike some similar devices where it feels much weaker on the vape. The battery life is impressive giving over a day of use on a relatively constant vape.

The internal battery takes about an hour for a full charge via the USB-C cable. If an internal battery device isn’t your first choice, but like this M100, there is a similar but 18650 version in the Geekvape S100 Aegis Solo 2.

All in all, I really cannot find any cons with the M100. It’s a small, sturdy, nice looking 100W device with good battery life. It performs really well with both MTL and DTL setups on top and would recommend it to any vaper, regardless of experience.

To purchase the M100 Aegis Mini 2 by Geekvape, visit Sourcemore and don’t forget to add that M1002M code for a 30% discount at checkout. Free worldwide shipping too. Thanks for reading!