Hello, Vapeworld! How have we all been? Well, today we are going to have a look at the latest kit from Voopoo: the Doric 60 kit! This device was kindly provided by Aimer from Voopoo (thanks again, Aimer!) for the purposes of a review.

If you have been around vaping for a while now, you will have noticed that trends come and go. And much like high-waisted jeans from the 80s that have made a comeback a few years ago, you will notice that simple-to-use tube mods and kits are having some sort of renaissance in the vape industry. Indeed, tube kits whether internal or external battery-powered were all the rage several years back, but as of late, several companies have released new models of these kits. They are minimalist, very user-friendly devices aimed for the beginner vaper/new switchers from smoking, usually with just a single button needed for operation and without a screen.

In my eyes, the Doric 60 from Voopoo aims to get in on this trend, with a few added extras as technology has improved over the years. So how does the Doric 60 fare amongst its competition?

As always, my review will be from my own experience of using the device as a regular vaper, as most of you vapers buying this device will be.

I was sent a sample pack that includes: 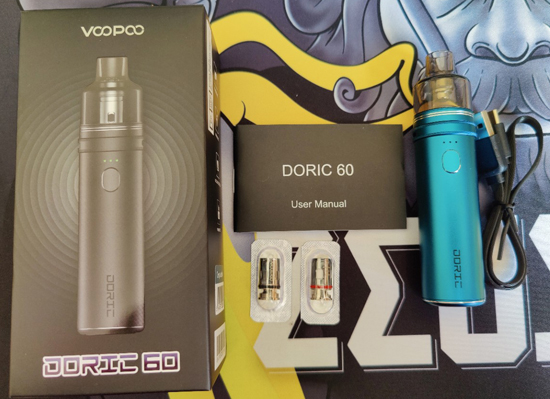 The kit packaging is simple and yet informative, per Voopoo’s style. Packaging contents, kit features, Voopoo’s socials, and standard warning language adorn the outside of the box. Overall, it’s about what we should expect from kit packaging without anything garish or unclear.

One of the things I commend Voopoo for is the fact that they continue to create devices around existing coil platforms. In the case of PnP though, it really is an ecosystem that they have created being more than just a coil platform, with numerous devices and accessories inside this environment.

The Doric 60 comes with a PnP pod, and if you already have devices within the PnP ecosystem before, all your pods, coils, or even RBA will be compatible with this kit. If you are new to the PnP pod, it is a plastic pod that holds quite a lot of e-liquid that is bottom-fill. All the coils are press-fit, which means that coils can just be pulled out of the pod if needed.

The mouthpiece remains comfortable although not interchangeable. The pod is clear which makes it very easy to see liquid levels.

The PnP pod changed the game, so to speak, in the vaping world when it came out. Loads of other vaping manufacturers cottoned on to its success, and understandably so due to the practicalities this design offers the vaper. However, one niggly thing about it for me is that it’s bottom fill: meaning I have to take the pod off the kit to refill, and sometimes this design predisposes pods to occasional leaking no matter the brand.

Overall, the PnP pod included in the Doric 60 kit performed to my expectations and experience of it. Not a deal-breaker by any means but the only wish I had is that if Voopoo could include the MTL pod (and coil) as well inside this kit. Doing so will enable a MTL vaper to experience a true MTL experience, especially with the kit having adjustable airflow + auto draw.

Saying all this though, one major advantage too of the Doric 60 kit having the PnP pod is the fact that it will be compatible with Voopoo’s newer pods as well like the TPP and TPP X Pod. The use of these pods expands the possibilities further for the vaper with the use of TPP coils. For more about these TPP pods and coils, do have a gander at our recent Drag series reviews like the Drag X Plus and Drag S/X Pro kits! 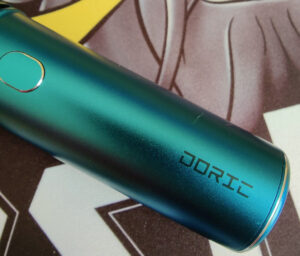 Keeping with the minimalist design I mentioned, the device/battery is quite simple with just one button for you to use. The exterior is sleek and smooth, and especially with the Deep Sea Blue colour I received, the mod is so pleasing to the eye! It is made from metal- perhaps zinc alloy as it is relatively light- and has a fingerprint and oil-resistant finish. The top of the mod holds the pod that has strong magnets at its bottom to secure it onto the mod. The contacts for the coil are up top, along with the microphone for auto-draw.

Up top as well is the airflow control ring with no stops. It has a cyclops hole plus a pinhole on either side. Again, very simple to operate and the addition of the pinhole is a good thing for MTL use of this kit.

As also shared, the mod has no screen, no adjustment buttons, etc. It is created for simplicity with one button to turn the device on/off (five clicks), and to adjust the power (three clicks). The power levels are in a cycle as you click and are indicated by the row of 3 led lights. White means high power, with green and blue indicating medium and low power, respectively. 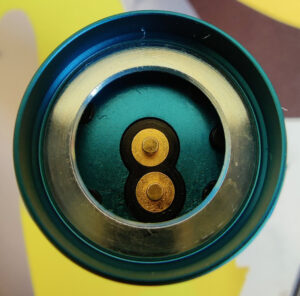 This power adjustment does work indeed, and it the level to choose will be really down to your preference. I ran mine at white most of the time for maximum flavour because that is the way I vape. The mod fires quick and hard, as expected with Voopoo’s trademark Gene chip.

As for battery life, 2500 mah indeed was enough for me to vape with all day. The device will tell you about how much battery is remaining depending on the number of led lights lit as you vape. 3 dots mean 66-100%, 2 dots for 30-65%, and 1 dot for below 30% battery charge remaining.

The USB-C charging port on the back of the device, near the airflow ring.

If you are familiar with PnP coils, then you would know what to expect from the coils included in the kit.

The 0.3Ω mesh coil (32-40W) is meant for DL/RDL depending on the way you vape (this is RDL for me). The kit gave me what I expected of this coil in terms of flavour, warmth, and clouds. I vaped with this coil with the airflow fully open, to good flavour maximised from my e-liquid which I’d rate at 7/10. I would surmise (and I may be wrong here) that the Doric 60 mod fires this coil at around 37W or so at the High level of power, given the flavour and warmth I experienced. This coil is a great choice to include in this kit!

The 0.2Ω mesh coil (40-60W) is next. Now, I have had mixed experiences with this coil since it was released with the Drag S which was my first exposure to it. The flavour is always superb but some VM5 coils I’ve used leaked a little. This is probably just down to luck, as is the case most of the time with stock coils anyway, and the VM5 coil that came with my Doric 60 kit performed excellently with just the occasional condensation (not leaking). The mod was understandably giving me a warmer vape given the lower resistance, with phenomenal flavour (8/10) and respectable clouds!

For what the Doric 60 kit is and who they are primarily aimed for, this kit is a straight-up Yay! This kit is meant for those who want a super-simple device to use that doesn’t compromise on vape experience

I would suggest this kit for beginner vapers who are wanting to venture into a bit of sub-ohm vaping but doesn’t want the hassle of tinkering around wattage settings, mod mode, and the like. It will give these vapers a fuss-free, quality experience. I would even recommend this kit as a backup device for experienced vapers, given its long battery life!

However, as mentioned in my write up, I would suggest to Voopoo to include at least an MTL pod and coil to this kit (Perhaps as a deluxe edition? Hmmm…) so that the auto-draw and airflow features of this kit, which I think are superior to its contemporaries, can really be maximised by vapers like me who do both MTL and DL. And I know that there are several vapers like me out there!

Once again, my deepest thanks to Voopoo for allowing me to test the Doric 60 kit! To purchase the kit, check it out over on the Voopoo official store or give it a search in Google to buy at stores in your country.