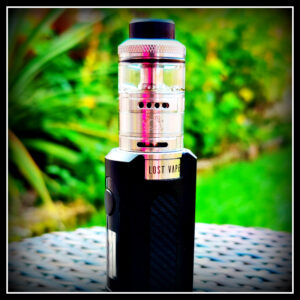 Another day, another hardware review my beloved vape fam! Today, we take a gander at one of Hellvape’s latest bids in the rebuildable atomisers market, the Fat Rabbit Rebuildable Tank Atomiser!

This device was kindly sent to me for review purposes by Health Cabin and Toby of thevapereviews.com. Huge thanks to you all for giving me the opportunity to review this tank and to share my feedback to the vape community!

Health Cabin is one of the biggest China-based vape retailers in the industry. Starting in 2009, they are one of the first online shops to get and sell the newest vape kits from established vaping brands. They also supply loads of retailers, alongside providing truly worldwide service to their consumers.

Now, on to the gear! Well, I am not going to lie – this RTA has got me excited! It’s not just because of its sheer size (and let’s be honest, bigger doesn’t always mean better!), but mainly because of how different it is from most mainstream RTAs available to us vapers. We will go through each of these unique features together in this review, and by the end of it, I hope to have helped you know more about the RTA, or even to decide about investing in it or not!

As always, my review will be from my own personal experience as an average vaper, as most of you reading will be.

I was sent the retail version of the Hellvape Fat Rabbit RTA, containing:

The box is in Hellvape’s signature orange, with the trademark chubby rabbit figure on top. There is an exploded view of the RTA in its parts on one side, and a picture of the RTA on the other side. The tank’s features, parameters, and box contents are all listed on the rear side of the box. It is perhaps one of the most comprehensive kit packaging I have come across, with all pertinent details clearly written outside the packaging. Well done here again, Hellvape!

Salient Features of the tank include: 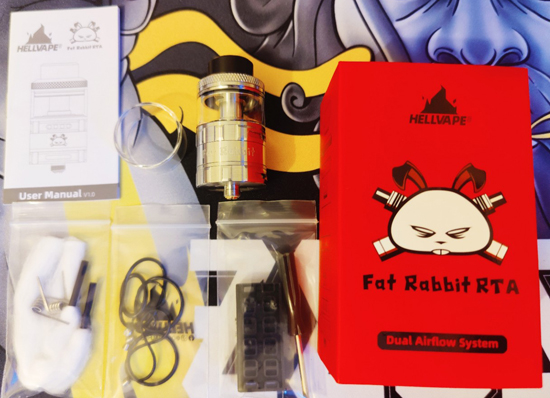 A. Filling and Drip Tip 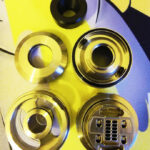 Starting at the top, the filling is absolutely easy with this RTA. The big fill holes can easily fit shortfill nozzles and drippers too. You can fill as slow or as fast as you like with no worries about creating air pockets and such. The top cap has textured knurling that actually does help with unscrewing/screwing the cap back on even with a little e-liquid on my fingers.

The drip tip is very comfortable to use, and I didn’t really feel like I’d want to use my own or another drip tip. Basing on my experience too, the anti-condensation design actually does work. Usually, during use, I would find a pool of condensation between the drip tip and chimney which I always clean off, and I didn’t have to do this so much with this RTA. 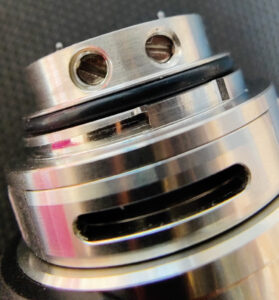 Let’s go to the airflow: it sounds like such a novel thing to be having two airflow rings on one atomiser but there have been a few similar attys in the market like the QP Fatality M25. The placement of these airflow rings on the Fat Rabbit RTA, however, does make this RTA stand out on its own. There are two cyclops holes at the bottom of the build deck, that rotate with the perfect amount of resistance. And then another set of two slots with four holes each. When both bottom and side airflow are wide open, it is a very airy vape indeed, but not really as noisy as I expected. In fact, it sounded rather smooth and gave off a dense enough vape to still pack some flavour with every puff. 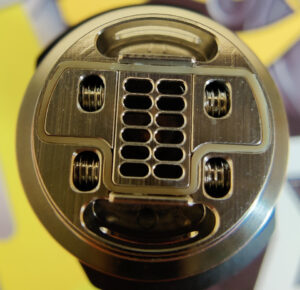 Coming to the build deck, indeed I said half-turn in my salient features section despite Hellvape’s website saying that it’s a quarter turn. And that is because I found that it has a little more travel than advertised, however, this doesn’t really take away anything from the experience. Once disengaged, give the deck a slight pull to separate the build deck from the rest of the tank.

The build deck is plenty big enough to throw whatever style of build you may want! This atomiser is advertised as a dual or single coiler, which is true, but in all honesty, you would get the most out of this atty with a dual coil build. If you are a pure single coiler, you might struggle a little with a typical 3mm diameter coil – a larger coil would be my recommendation in this instance purely to cover the size of the deck. 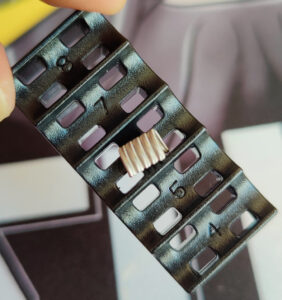 I do love postless decks! The box comes with a coil cutting tool with you can use, and this tool even comes with a recommendation of where to trim your coil leads (6mm). But because I am a little stubborn, I trimmed mine to 5.5 mm which is actually perfect for the coils that I used (3mm diameter Aliens). With this coil leads length, my coils were not too high to be losing some flavour, and not too low to be touching the deck. It was just spot-on!

With the bottom airflow open, the air comes from underneath the coils via a dozen sizeable holes punched into the deck. It’s actually this part of the tank that, and in my eyes, gives this tank an edge over most RTAs in terms of the flavour it can give. It assures plenty of air to go into the coil/s and out into the chamber for maximum flavour.

Building on this deck is dead easy. Once secured into their slots, make sure that the coils are centred enough in the build deck, not touching each other and the deck. 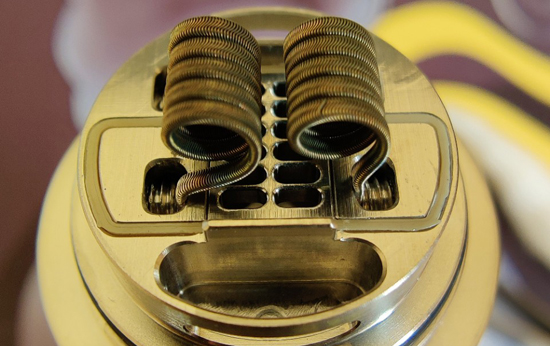 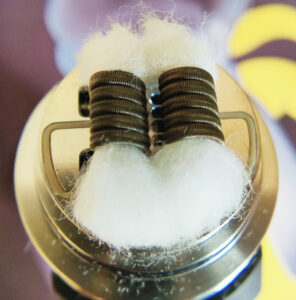 Wicking was easy enough for me, although on my first try, I trimmed a little too much of the cotton which means that there wasn’t enough cotton inside the wicking wells- and that of course meant some leakage (completely my fault, of course). With this in mind, my second go at wicking was (dare I say) perfect with absolutely no leaking or dry hits! What I’ve found is that when the provided cotton strips are used, the ends do need to be fluffed well, but the trim should be just enough that there’s adequate cotton inside the wells to soak up the e-liquid, but also making sure that the ends aren’t touching the bottom of the well to avoid dry hits.

And when properly coiled and wicked, my word, this RTA gives me one of the best flavours I have ever had off an RTA! I would say that it even rivals my favourite mesh RTA of all time. I wasn’t expecting that outcome if I am totally honest, and so you can imagine the smile on my face as I vaped with this RTA (on my second wick attempt!).

Another no question, Yay from me for the Fat Rabbit RTA! The size may look intimidating for the average vaper, but if anything, it lends this RTA great versatility in being able to handle almost any builds. The flavour it gives is just phenomenal, and if you’re a cloud chaser, there will be plenty of clouds, I can assure you!

I really struggled to find a negative point with this RTA- it is really just so well-designed and engineered! The only one I can think of, which isn’t really a con of the atty itself, is just to be mindful of wicking it per my experience as above.

I would highly recommend this RTA especially for those looking for something a little more from the typical RTA. Those who want more options in customising their vape will surely enjoy this RTA. Would I recommend this to vapers who are new to rebuilding? I would say Yes to that too, just because building it is really easy with having a postless build deck, and with the various configurations possible with flavour, warmth, airflow.

Would I replace this if I broke or lost it? Absolutely! This RTA will stay in my rotation of vape devices, matched with an appropriate mod of course.

My sincerest appreciation again for Health Cabin and Toby of thevapereviews.com for sending me this great piece of kit!

To pick up the Fat Rabbit RTA, visit the links at the start of the review and remember to register an account at Health Cabin and log in to see the best price.