Hello folks! Today we are going to have a look at the Joyetech Tralus! This kit was sent to me for the purposes of a review from Vapesourcing.com. Vapesourcing is an online vape shop based in Shenzhen, China (the holy place for vapers!) and has been in the vaping scene for a long time. They carry a massive selection of vape gear and supplies, and have great vape deals too!

The Joyetech Tralus is one of Joyetech’s latest releases and most recently is partnered with a couple of their other devices for their Trio pack. As always, my review will be from my own experience of using the device as a regular vaper, as most of you vapers buying this device will be.

Vapesourcing has kindly sent me a sample pack with contents that include:

The packaging is small and compact. I do like this style of packaging as it doesn’t need to occupy more space than it should. Everything can be read clearly about what the package contains as well as Joyetech’s social media details.
The kit as a whole feels solid and nice to the touch. It has sleek lines and is very pocketable. 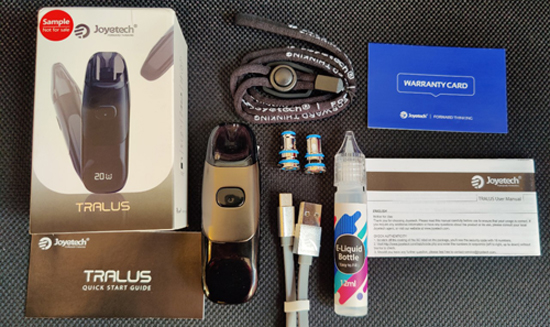 The device/battery is quite simple with just one button for you to use. This button turns your device on or off with five clicks and fires your vape. The device’s wattage can be adjusted with three clicks of the same button. There is also a tiny LED light embedded in the button that lights up when you fire your vape and when you detach your pod.
One of the many things I liked about this device is the subtle branding. You’ll see “Joyetech” and “Tralus” written on each side but only if you look for these; they do not jump out at you unlike other kits out there showered in bright and bold branding.

Despite the device being compact, Joyetech still managed to include a crisp OLED screen that will tell you basic vaping data such as wattage and battery life. There are also situational features such as informing you of the coil resistance when you put the pod in, and the remaining charging time when plugged into a charger.

The USB-C charging port is at the bottom of the device.

The pod is a bottom fill and employs a push-to-fill refilling system. I have had PTF systems before, and for the most part, they are quite good at preventing leakages from the fill port. This system makes it also childproof. However, it does make refilling slow and tedious, and sometimes I have found that I needed to push down quite hard in order to fill. Another downside to this system is that not all e-liquid bottles will be compatible with PTF, and this is why Joyetech kindly provided a small e-liquid bottle for the vaper to decant their favourite liquids into. Therefore, I wouldn’t necessarily say that this is a con for this kit. These are nature-of-the-beast observations, meaning to say any PTF system will have these tiny and niggly concerns.

The coil head sits in the middle of the pod, almost dividing the pod capacity in two. And because of this design, I had to tilt the pod sideways to make sure the liquid gets to the other side quickly (because unfortunately, I am not the most patient person at the best of times!). This is manageable but I thought that it could have been designed better.
The mouthpiece is comfortable although some people may find it to be a tad too big. The pod sits on the Tralus battery firmly with no rattling whatsoever, held securely by strong magnets. And, as a huge plus for me and millions of vapers out there, I have experienced no leaks whatsoever using this pod!

There is airflow control in the form of a sliding tab on the side of the pod. For the way I vape though, this airflow control does help but not a lot. I like a medium MTL draw and I had to turn the airflow almost 70% closed to get the draw I wanted. It is rather loose and will be even more so for tight MTL vapers.

The first coil I tried is the 0.6 ohm coil. This coil had no leaks and no problems wicking whatsoever even though I actually used 70/30 liquids. The flavour is OK and I’d rate it at 6.5/10.

However, I think this coil will perform better at higher-powered devices. It is rated for use between 16-20W, but even at 16W I was not feeling the warmth or hit I was expecting despite playing around with the airflow tab. Also, using the device at this wattage drained the battery quite quickly as expected.

I then tried the 1.2 ohm coil next (7-11W), which in my opinion is the star of this kit. The flavour is great at 7/10, and together with the airflow control tab, delivers a satisfying medium-draw MTL vape for me at 10W. Coil longevity is quite good as well- I was able to get around 2 weeks of use from this coil.

I did take notice and loved the fact that the coil resistances and best wattage range are listed at the bottom of each coil. No more trying to see through the pod to try and remember the wattage range for the coil you’re on!

As far as the coils are concerned though, I am hoping Joyetech will consider releasing a 0.8 ohm or even 1.0 ohm alongside the 1.2 ohm coil with the Tralus kit in the future. This is because I think MTL vaping is where this starter kit shines.

I would say that this is a Yay for those who want to try vaping because it will fulfill your needs as a basic starter kit. Although one downside (and probably a missed opportunity for Joyetech here) is that it does not have auto-draw. For a kit this size, I was really expecting it to have this feature and especially so as it is a starter kit. However, this is a subjective comment and some vapers will not mind this as much.

This kit is excellent as a MTL kit and is highly recommended for those wanting a loose to medium MTL draw. I would not really recommend this kit (a Nay) for DL or even RDTL vaping, as at least for me, the vapour is too cool and the draw not too satisfying for a sub-ohm vape.

Once again, I want to thank Vapesourcing for the opportunity to review this kit. At the time of writing, you can buy the Joyetech Tralus from them at a very affordable £18.