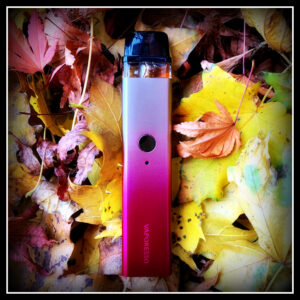 A pod kit review today and this is the XROS by Vaporesso. This was released a few months ago and has become a popular little MTL pod stick. Vaporesso originates out of Hong Kong and is a household name within the vaping industry by the level of the decent mods and kits they have released. Vaporesso has a popular web store where you can purchase the products or can pick them up at pretty much every good vape shop within your country.

I’ve been using this XROS pod daily over the last week, so let’s see how it comes and will give you my thoughts.

The Packaging and What’s in the box? 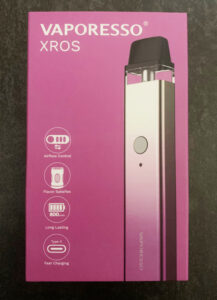 The reverse of the box features printed specifications and packing list of box contents. Printed under that are warnings, batch number, bar-code and scratch for authenticity panel.

Inside the box is the main XROS device pre-installed with a pod (rated at 0.8ohms). Next to the device is a spare pod (rated at 1.2ohms) and a USB-C charge cable. There is also a branded cardboard sleeve in the box which includes the user manual, warranty card, and other printed information. 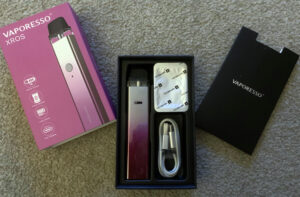 The Vaporesso XROS is a portable pod stick measuring just 11.2cms length, 2,3cms width with a depth of 1.3cms. The front of the XROS has a circular power/fire button above a bright colour changing LED. Etched underneath is the Vaporesso branding. On the reverse of the XROS has a small adjustable airflow slider. The USB-C charge port is on the bottom of the device.

The unit is powered by an 800mAh internal battery and fires a maximum of 20W, though is 11W or 16W depending on the pod. It is a very simple user-friendly pod stick that requires 5 fast clicks to power the device on and off. The LED gives a guide of current battery level with Green being high, Blue at medium level and Red being low and needing a charge.

You can either fire the device by pressing on the button to draw or use the built-in automatic puff function.

The colour of this device for review is ‘Rose Pink’ and is a Pink/Silver gradient. You can also get the XROS in Blue, Sky Blue, Matte Grey, Silver and Rainbow colours. 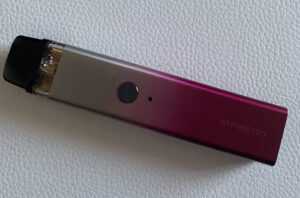 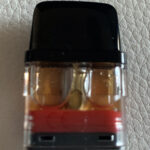 The pods used in the XROS are a closed pod with an E-liquid capacity of 2ml. Being a closed pod means you cannot just change out the coil and have to use a new pod on these. The coil is sealed within the pod.

To refill the XROS pod, you simply pull off the top drip tip casing and fill by the exposed juice port at the top. You then just snap back on the top part. The pod then pushes into the XROS device securely and is held at the bottom by a magnet each side.

Two pods are supplied with the XROS, both containing mesh coils rated at 0.8ohms and 1.2ohms, so is all set-up for mouth to lung vaping or a massively restricted direct to lung draw.

When I first saw the XROS, I thought it was just another pod stick entering an already stifled pod system market. In fact, I totally overlooked it at first. On setting it up and vaping with it, it totally exceeded my expectations and haven’t put it down for a week. I recently bought the new Uwell Caliburn G and I thought nothing could come close to that, but since using this XROS, the vape and flavour are definitely as good!

I find it hard to identify any cons with the XROS. The only thing that holds it back slightly for me, is the closed pods. If you could change the coil, you could easily change the E-liquid by washing out the pod and adding a new coil. Being closed, that makes things a bit harder. That being said, it is a minor issue because it really is an impressive little pod stick and replacement pods are cheap enough.

The mouth to lung draw on it is absolutely superb and the little airflow slider on the back is a big help if you want a more restricted puff. Quite honestly, this is possibly the best pod device I’ve reviewed on this site that could be targetted to smokers looking to kick the cigs.

The XROS battery gives me more than a full day before needing a charge and then it’s only an hour or so to get a full charge again via the USB-C cable. The pods also look to last very well. I currently switch between Dessert flavours in one pod and Fruits in the other and so far haven’t had any flavour muting or tasting like the pod is on its way out. The flavour it gives on both of those profiles is brilliant with a decent amount of cloud on the resistance of each pod/coil.

I gave up putting scores on Hardware reviews but the XROS for me would easily be a 9.5/10 as a small portable pod device. A device like this should be mandatory for doctors to issue smokers and also a brilliant device for MTL vapers looking for a small device that packs a punch. Very impressed, great work Vaporesso!

You can pick up the XROS by Vaporesso directly from Vaporesso on the links at the start of the review.

If you want to check out prices and competitors in your country to order one in, you can also search for it on VapeView HERE