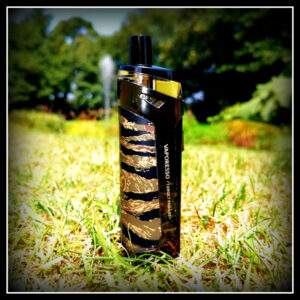 Well, here we have it! A look at the Vaporesso Target PM80 SE kit in all it’s glory with all it’s affordable bells and whistles.
This is a pod kit from Vaporesso, which has a good measure to be powered by a single 18650. This was sent from a Vaporesso representative in the UK.

More than just a simple pod kit? Yes, I definitely think so when you look at how you can tweak a very good pod system into an outstanding one.

The Packaging and what’s in the box? 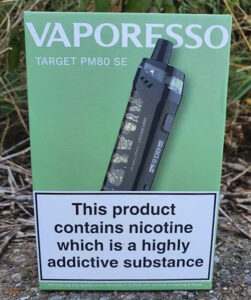 The Target PM80 SE pod kit by Vaporesso comes in light green and white cardboard box with all accessories included. The box shows an impressive picture of the kit, with the obligatory nicotine warning (there’s no missing this!). Nicotine? We all know by now that the kit doesn’t include any nicotine until you fill the tank with e-liquid that contains nicotine.

The sides of the box include basic information, with one side outlining key features, such as its power-boosting, the new mesh GTX coils, it’s Insta-fire Axon chip, and the impressive 3A fast charge. The reverse of the box shows another enormous nicotine warning (you definitely can’t miss these!) with the Specification and packing list above.

Inside the box is the main PM80SE Pod unit. The one I received is a kind of organic black and green camo type animal stripe design, with the metal parts in a gunmetal colour and a slight brown tint, which sets it off nicely with the stripes. (other colours and designs are available, including a very attractive blue marble)

Next to the device (which has one 2ml pod fitted, but NOT the coil – yet) is a second 2ml pod, and the 2 GTX coils, which come in 0.2 and 0.6 ohm of the mesh variety. It’s great to see more and more devices sharing the same model of coils. Under the plastic tray, you will find a fairly decent USB cable (Micro USB is the flavour of connection here) and all the usual warranty cards and instructions. The inclusion of a few airflow control bungs is handy too. It would have been nice to have seen a separate battery safety warning card. Everything you need to get this up and running is in the box – except the 18650 battery to power the device.

Vaporesso’s PM80 SE is a tight, solid little pod device. While it’s pod design may be unsymmetrical, there’s no way of fitting the pod incorrectly. It’s not a huge mod, measuring 121mm tip to base, just under 25mm wide and 34mm thick. The fire button is above the VERY clear screen (even my old eyes can read it) which works amazingly even in bright sunlight. Below this, a pair of up and down buttons, with the Micro USB charge port off to the right side of these at the bottom.

Running off the 18650 battery of your choice, you have the option of a full 5w to 80 range in 0.5w increments. The screen displays a well-organised set of data, including battery capacity remaining in %, resistance, power, mode, puff count and suggested best power range for the coil it’s currently fitted with. When charging, it tells you the current % charge, along with how long before the battery is fully charged. 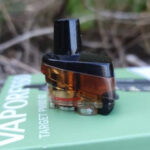 The pods are simple to use, can only fit in one way. These take the GTX coils, along with the optional RBA deck (more on that later.) It comes with a small fixed rubber stopper for easy refilling, with spares in the box. The standard pod capacity is 2ml, in line with the TPD legislation. It’s also possible to get a 4ml capacity pod, which is physically the same size, lacking the rubber filler block inside the pod. This is fixed. (and yes, I’ve tried to remove it, with no luck).

Refilling the pod is via pulling back the rubber bung on the bottom which presents you with a more than adequate size filling hole. Simples.

This was (well, is) my daily driver. After hitting this for over a month, the chip provides excellent power efficiency. I’ve dropped it a couple of times from head height to the carpet (accidentally) and onto a hard surface, with no cosmetic or functional problems. It also survived my recent car crash – though I don’t think this is a standard test for vape devices…. yet. (insert canned laughter here)
As all pod systems, this would have been even better if you could use your own drip tips, but maybe this will be solved with 3rd party pods. I have noticed that there’s an RDTA 3rd party option out there; Google is your friend. I got zero leaks during a lot of use of the kit, only some very minor condensation, which I sort of expected anyway.

It’s handy enough to fit in the pocket, but not big enough to push everything else out of it.

As is, the boxed product is a remarkable one, which takes stratospheric leaps when you combine it with the two official optional extras: The 4ml tank and the RBA deck.

This combination takes it to the next level for those who have some experience with building. For those who don’t, the stock coils produce a fantastic flavour across fruits, deserts, and tobaccos. Personally, I like a higher resistance and lower power vape, and this allowed me to have the customised experience I wanted. With a pack of two 4ml pods at around £6, and the RBA deck at around the same price, this makes the whole package an incredibly competitive option. The standard package will provide a great vaping experience on its own. With the DTL and Restricted DTL coils, and also the option to use the RBA, it can cater for all. The GTX coils work well with liquids from 50/50 to 70/30 and lasted me a good two weeks of constant use.

Who would I recommend this to?

A new starter? Yes.
It provides a good solid, effective platform to switch from cigarettes. Simple to use, quick to charge, with great flavour, and cheap standard coils you can purchase from most vape shops. Not MTL, but satisfying, especially with nic salts.
An intermediate vaper? Yes.
With the option of a larger capacity tank and a rebuildable deck, you can tinker with this for the experience you want. You will save money in the long run by not buying coils; though the GTX coils are so good, I did even purchase a couple more.
An experienced vaper? YES!
I’ve been vaping since 2007, and this device with all its options (and the 3rd party one which I will definitely be getting) gives you a dynamic device.

How would I rate this device?
One word: Outstanding.

This review was by long time vaper and vape show host; Chunkmeister. You can find his website at chunkmeister.com and catch his live shows on his Youtube channel on most Wednesday nights at 10 pm.